Christmas at the "Last House Standing" 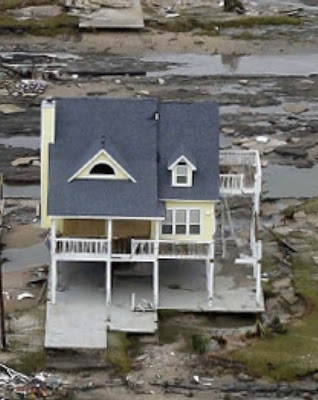 Christmas at the last house standing

(CNN) -- The streets are dark and the town is deserted, but Pam and Warren Adams still put up Christmas lights outside their Gilchrist, Texas, home. It is one of the few remaining after Hurricane Ike devastated the area in September.

When Ike hit Gilchrist on September 13, it destroyed nearly everything in its path. Most of the 200 or so houses there were flattened by the storm surge, and the Adams home was the only one left standing on the Gulf Coast side of the town.

Now, the couple has returned to repair their battered home. Warren Adams is living in an RV trailer on their beachfront property. Pam Adams, 53, who spends the week at an apartment in Baytown, Texas, drives more than an hour to visit their home each weekend.

Life goes on, even when it seems like doesn't go on all around them. Everything inside the house is waterlogged, mud-coated, and it is a mess. It looks like it is going to be a very long time before it is completely livable. The couple plans on building elsewhere and using this home as a weekend house.

"I'm so proud my house survived," Adams said. "I didn't realize how much I loved the house until I moved into this apartment."

Adams said she and her husband would sit on their balcony and watch the ocean and sunset in the evenings. "I want everything back the way it was," she said. "I want my neighbors back."

That has to be hard. I can not imagine every house in my neighborhood being GONE. My house still standing. I was not surprised to hear that they haven't seen a dime of insurance money yet. This year there will be no present opening in Gilchrist, but 2009 should be much better.

There will be no presents or visits with friends and family. It didn't seem appropriate, Adams said. "Everything's so depressing. We didn't feel like we should be celebrating when everyone's suffering so badly."
advertisement

But the couple has big hopes for next year. "It'll be a big Christmas with the neighbors," Adams exclaimed. "We'll fry turkeys, and there will be a lot to celebrate."

Adams said she's looking forward to 2009. "I just want to get back home and watch all the structures go up in Gilchrist. We want to be the welcoming committee. We just want everyone to return."