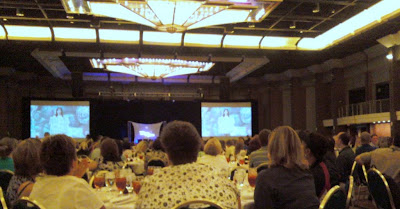 One of the highlights of AVID Summer Institute is the luncheon. The luncheon is in a huge ball room. There are about 2,000 people stuffed in there. And there are two luncheon days. They happen on Wednesday and Thursday. The food is good, but the speeches from AVID teachers and students are way better.

Here is an editorial from this week's Dallas Morning News. It gives an overview of the luncheon that I was at and also about how powerful it was.

If only those naysayers who believe Texas puts too much pressure on kids, especially poor ones, to attend college could have been at the Dallas Hyatt Regency on Wednesday.

They would have heard straight talk from Monica Washington, an English teacher from Texarkana; Ron Rossingh, an Odessa Permian sophomore; Elizabeth Ruiz, a top Edinburg High School graduate; and Gerardo Venegas, a Lake Highlands grad headed for Baylor. These were some of the most determined students and teachers you could meet. They not only dream big, they fuel it with the passion to realize those dreams.

They spoke to a summer institute run by AVID, a nationwide elective program that gives elementary and secondary students an extra push toward a college future.

Washington was first. The thin, soft-spoken African-American woman stared into the 1,800 faces staring back and launched into an inspirational address rivaling something out of Barack Obama's mouth. She had every bit of the crowd's attention when she described hearing a student in her AVID class say, "If I go to college..."

She knew she had to change that to, "When I go to college..."

Rossingh, broad-shouldered and round-faced, offered an arresting personal story. He was brutally frank about his drug-addicted mother, his spiral into gang life and his grandparents and middle school teacher who helped him turn himself from a smart-mouthed C student to an inquisitive A student.

What did it? Part of it was realizing that "gangs don't hand out scholarships."

Then, he leaned over the podium and said in the steeliest voice, "And I will be a college graduate," as adults around the room reached for tissues.

This is what Rossingh and his peers represent: They prove we can overcome the achievement gap, that pernicious divide that separates wealthy and poor, white and minority. It will take effort, programs and money, but we can get there. Initiatives like AVID (Advancement Via Individual Determination) prove that, by believing that every student can get to college with rigor and support.

Yes, the same college that naysayers say is too hard for some kids to achieve. Try telling that to these students. They want to go places, and their teachers believe they can get there.

The rest of us should get out of their way.

Definitely a highlight of my week.
Posted by Duez at 9:33 PM