Would You Want A Kindle? 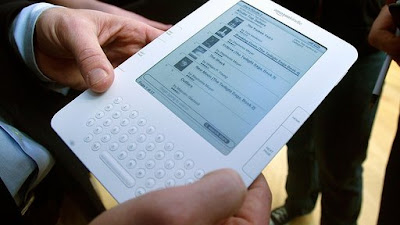 Would you trade your textbooks for a Kindle? The price would be a great deal smaller for a school district that would be purchasing thousands of them. Interesting.

NEW YORK (AP) — Amazon.com Inc. will release a larger — and more expensive — version of its Kindle electronic reading device that is geared toward periodicals and textbooks.

During a press event Wednesday at Pace University in New York, Amazon founder and Chief Executive Jeff Bezos showed off the $489 device. It has a grayscale screen that is 9.7 inches on the diagonal, up from 6 inches on the regular Kindle. The new Kindle DX also includes a QWERTY keyboard like the current Kindle.

The announcement comes three months after Amazon revealed a slimmer, updated version of the original $359 Kindle, which wirelessly downloads books. Some analysts have said the unit needed must-have content like textbooks to become more of a mainstream gadget.

Three textbook publishers said they have agreed to sell books on the device.

Would you want a Kindle instead of having to carry ALL of your textbooks?
Posted by Duez at 3:01 PM