College Degree is not enough 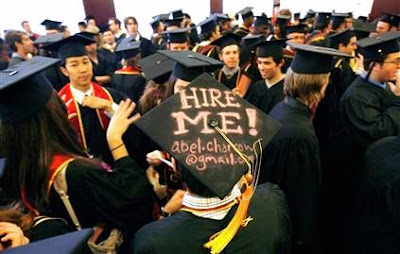 Posting this article is not meant to scare anyone. But, what you have to know is the truth and the reality. It is tough out there. Luckily it's less tough in the Houston area than most others in America.

Here is the beginning piece to the article: For class of 2009, degree doesn’t mean a job
Fewer than a fifth of graduating seniors even have offers, research finds

A college diploma has long been the ticket to a good job, but the deepest economic slump in decades has dampened the dreams of many college seniors.

Matt Dumont has been looking for work since May.

“I’ve had a couple times that I was told that I was one of the top applicants, went in for an interview, and then I just never heard back from them,” said Dumont, who graduated last spring from Abilene Christian University in Texas with a degree in English and minors in Spanish and the Bible.

Dumont was haunting the college’s Career Center last week, looking for leads and advice. But the prospects are not promising for him and thousands of other new college graduates: Employment counselors and job placement specialists say the class of 2009 faces a daunting task finding work in the worst economy since the Great Depression.

Labor statistics for July showed that 15.3 percent of Americans ages 20 to 24 were unemployed, up a tenth of a percentage point from June. That’s compared to the overall jobless rate of 9.4 percent.

Those figures don’t indicate how many were recent college graduates, but surveys by the National Association of Colleges and Employers, a professional organization of career counselors at more than 2,000 U.S. colleges and universities, show that the recession has been particularly tough on those entering the job market with a college degree.

More than half of graduates in the class of 2007 had job offers in hand when they finished school, the association said. That figure dropped to one-quarter of 2008 graduates — after the recession began in December 2007 — and for the class of 2009, it was fewer than one-fifth.

Graduates ‘frustrated,’ ‘scared’
Projections for the class of 2010 won’t be final until the fall, but the association said the picture next spring was likely to be even worse.Please go to this link to read the rest: For class of 2009, degree doesn’t mean a job
Fewer than a fifth of graduating seniors even have offers, research finds

What do you think AVID? Are you worried? What can you do to better your job and career chances after college?
Posted by Duez at 7:19 AM