The Art of the Commencement Speech 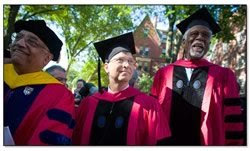 When you graduate from college, someone will deliver a commencement address. Sure a student will be elected to speak for you. But, usually someone "important" will also address the class.

This site shows some of the very best commencement addresses:
Humanity.org "The Art of the Commencement Speech

There were some great ones this year:
Barack Obama "Make Us Believe Again" at Wesleyan University, 2008

You see, I spent much of my childhood adrift. My father left my mother and me when I was two. When my mother remarried, I lived overseas for a time, but was mostly raised in Hawaii by her and my grandparents from Kansas. My teenage years were filled with more than the usual dose of teenage rebellion, and I’ll admit that I didn’t always take myself or my studies very seriously. I realize that none of you can probably relate to this, overachievers that you are, but there were many times when I wasn’t sure where I was going, or what I was going to do with my life.
...
But I hope you’ll remember, during those times of doubt and frustration, that there is nothing naïve about your impulse to change the world. Because all it takes is one act of service – one blow against injustice – to send forth what Robert Kennedy called that “tiny ripple of hope.” That’s what changes the world. That one act, an act by you, class of 2008."

Barbara Kingsolver "Your Money or Your Life" at Duke University, 2008

"You could invent a new kind of Success that includes children's poetry, butterfly migrations, butterfly kisses, the Grand Canyon, eternity. If somebody says "Your money or your life," you could say: Life. And mean it. You'll see things collapse in your time, the big houses, the empires of glass. The new green things that sprout up through the wreck -- those will be yours."