Road Trip Nation article about AHS in the Atascocita Tribune

Very nice article about our field trip to Deer Park for Road Trip Nation.  Very cool.
The article is written by Kim Melchor.  She is a great supporter of AVID (Her son is a senior in our AVID program).
http://www.ourtribune.com/article.php?id=8796
Define your own road in life
Monday, December 07, 2009
Kim Melchor 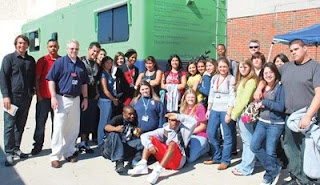 Photo: Roadtrip Nation co-founder Mike Marriner, Humble ISD instructor David Duez and Humble ISD AVID program sophomores explore the big green RV. Photo courtesy of David Duez
Define your own road in life.
In 2001, four college friends took off on a four-month road trip in order to look for inspiration in their career paths. Equipped with a camera and an old, lime green RV, the group traveled the country in pursuit of people who do what they love for a living.  On  Nov. 2, more than 300 students from Humble ISD, Deer Park, Fort Bend and Pasadena had an opportunity to hear about the experiences of co-founder Mike Marriner at a special appearance of the Roadtrip Nation Experience. The program has evolved into a PBS reality show, several books, an online community, and sends students out on the road in order to talk with individuals who “chose to define their own road in life.”

Humble ISD sophomores in the AVID program were specifically chosen to attend the event. Last year, Roadtrip Nation created  a partnership with the national preparatory AVID program  in order to provide a classroom materials and instruction to disadvantaged and underachieving students. Atascocita High School Avid instructor David Duez called the program, “exactly what our sophomore students need.” He said that students who might otherwise get worn down are inspired by the program. “They are really connected to it.”

Students who attended the event at Deer Parks High School’s south campus had a chance explore the big green RV, as well as watch an live interview with a local businessman.  State rep. Wayne Smith was also in attendance.

Based on funding from PBS and AT&T, the Roadtrip Nation Experience provides workbooks and DVDs with supplemental videos and interviews based on certain themes. The program is described as an “interactive, multi-lesson curriculum designed to facilitate self-discovery and give students direction in exploring different passions in their lives.” Duez said that students explore topics such as risk, success, and failure, and what it has meant to successful people. He explained that many students had previously, “never looked at the idea that failure is not a bad thing to learn from. Some are so worried about mistakes that they don’t try things.”

Duez said that the program teaches students that there are many roads to success. “For those who don’t make it to college, there are other ways to succeed.”

Road Trip Nation in broadcast on Sundays at 12:30 a.m. KUHT-TV Channel 8. Interviews are available on the program’s Web site at http://www.roadtripnation.com.