On March 29th, our AVID classes are going to be able to see the new Invisible Children video.  We will also have the honor of meeting a Ugandan person who will be visiting our school.


On Thursday and Friday we watched the original Invisible Children documentary.


It brings to mind a book that I love called, "A Long Way Gone: Memoirs of a Boy Soldier."  So I thought I would highlight it here: 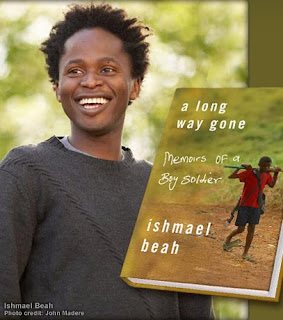 
From the website, about the book:
"A gripping story of a child’s journey through hell and back.

There may be as many as 300,000 child soldiers, hopped-up on drugs and wielding AK-47s, in more than fifty conflicts around the world. Ishmael Beah used to be one of them. He is one of the first to tell his story in his own words.
In A LONG WAY GONE, Beah, now twenty-six years old, tells a riveting story. At the age of twelve, he fled attacking rebels and wandered a land rendered unrecognizable by violence. By thirteen, he’d been picked up by the government army, and Beah, at heart a gentle boy, found that he was capable of truly terrible acts. Eventually released by the army and sent to a UNICEF rehabilitation center, he struggled to regain his humanity and to reenter the world of civilians, who viewed him with fear and suspicion. This is, at last, a story of redemption and hope."
Posted by Duez at 2:23 PM